This week on Facebook: To follow on from last week I reprised this post in which I reviewed money and debt from previous postings. With only slight variations the post remains much the same and now includes a new one from 2011 (click on image below). 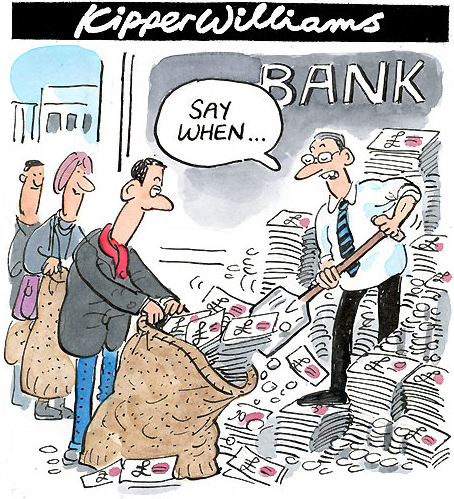 Successive government’s fiscal policy has already made the situation harmful to the general public… who remain exposed to the mis-selling and risk-taking of the bankers. While any fruits (monies) from the magic money tree are simply used for the benefit of whichever political party is in office.

I posted Money money money…. in January 2013 and then Crises & Credit in February, the first article posted being somewhat allegorical and intending to be amusing. However, it did lead to the second article, which is intended to be specifically about private debt but mentioning both private and public debt. The difference being that private debt is the debt accumulated by individuals or private businesses in the debts of personal loans, credit cards, or business loans (including corporate bonds). Whereas public debt is the sum of the financial obligations incurred by the State and its public administrations. This debt can be accumulated by the government directly or a government agency at any level, recovered by taxation and any other Ponzi Scheme that the State can use to feed the insatiable magic money tree¹.

As one who remembers a time when most people lived in a cash based society — before the introduction of Fiat Money and credit scores — when most people had to live off whatever income they had, I found the site at Measuring Worth interesting. It enabled me to compare the Income or Wealth value of £1 from 1945 to 2017 showing that (simply put) over 95% of the changes in relative Income or Wealth have occurred since the introduction of Fiat Money in 1973. This 95% increase over the period 1971 to 2017, heralding the advent of cheap money be it Fiat Money or public and private debt, is the worst inflationary period in the history of global monies² and the pound sterling.

Fiat Money enabled quantitative easing by the government’s now unlimited supply of cash and this increase in the government’s money supply gave rise to low interest rates in the fiscal policy of most States’ responses to financial crisis of 2008. However the role of commercial banks in issuance of private debt was largely ignored. My 2013 February post Money Creation considered the role of commercial banks and UK government fiscal policy on the creation of private debt. I also posted ‘Don’t bank on it!’ in September 2013, quoting that the recently released Vickers Report³ will not prevent the next crisis nor make it any less harmful, the general public remain exposed to the mis-selling and risk-taking of bankers.

Is it not quite illogical, indeed indefensible, that the state should be so concerned to maintain its sovereignty in the issue of coins or notes that it allows this new form of money, used overwhelmingly today, to be created outside its control? Lord Beswick: Money Supply and the Private Banking System — Hansard November 1985

Successive government fiscal policy has led to the supply of cheap money making the rich even richer, it also led to a prolonged period of austerity on the pretext of controlling government induced public debt, an austerity created by the government’s own fiscal policy. This austerity is strongly contested, with the government’s role in this debt creation and the increased wealth of the commercial banking sector exposed.

1. The truth is out — money is just an IOU, and the banks are rolling in it (March 2014): Last week, something remarkable happened. The Bank of England let the cat out of the bag. In a paper called “Money Creation in the Modern Economy”, co-authored by three economists from the Bank’s Monetary Analysis Directorate, they stated outright that most common assumptions of how banking works are simply wrong, and that the kind of populist, heterodox positions more ordinarily associated with groups such as Occupy Wall Street are correct. In doing so, they have effectively thrown the entire theoretical basis for austerity out of the window.

“Rather than banks receiving deposits when households save and then lending them out, bank lending creates deposits” … “In normal times, the central bank does not fix the amount of money in circulation, nor is central bank money ‘multiplied up’ into more loans and deposits.”

2. Banks lend people money they can’t afford to pay back because it’s profitable (May 2017): At Citizens Advice we see the impact of that every day. Last year we helped more than 350,000 people manage debts they couldn’t afford. Including helping people with 141,000 credit card issues, 116,00 with personal loan issues, and 51,000 with overdrafts issues.

There is a growing level of concern that people are taking on too much debt. Bank chiefs have called growing credit card debt a ‘ticking time bomb’, the Times’ splashed on potential mis-selling of car finance, and the Bank of England and Financial Conduct Authority have raised concerns that households are borrowing too much.

3. Britain’s Private Debt Problem (September 2017): Contrary to political group think it was actually access private debt not public debt that brought the economy crashing down. But today private debt is again raging and nobody seems to want to address the issue.

4. We’re racing towards another private debt crisis – so why did no one see it coming (August 2017)? The lie I am referring to is the idea that the financial crisis of 2008, and subsequent “Great Recession,” were caused by profligate government spending and subsequent public debt. The exact opposite is in fact the case. The crash happened because of dangerously high levels of private debt (a mortgage crisis specifically). And – this is the part we are not supposed to talk about—there is an inverse relation between public and private debt levels.

We tend to think of money as if it is a bunch of poker chips already lying around, but that’s not how it really works. Money has to be created. And money is created when banks make loans. Either the government borrows money and injects it into the economy, or private citizens borrow money from banks. Those banks don’t take the money from people’s savings or anywhere else, they just make it up.

5. The next financial crisis (July 2018): Two medicines have been prescribed. One: record low interest rates (including negative interest rates in places such as Japan and Switzerland) which make it cheaper for banks to borrow money from central banks. Two: the creation of cheap money for banks in the form of quantitative easing. These policies flood financial markets with new cash, which if left unaddressed can lead to inflation as well as the development of dangerous new asset bubbles. Most central banks are nervously monitoring the effects.

Central bankers and politicians have become used to thinking about crises – like those that might arise from automation or climate change – as something that happens to them. The truth is, the next one is likely to be of their own making.

¹There is a magic money tree – don’t let politicians tell you otherwise (url) Since 2009 the Bank of England has purchased £453 billion of government debt from the private sector through a process called ‘quantitative easing’ (QE). Put simply, QE is the technical name for what happens when a central bank creates new electronic money and uses it to purchase assets from financial institutions. Yes, that’s right – newly created money. Alas, the magic money tree does exist!

²How the Value of Money Is Determined (url): The value of money affects you every day at the gas pump and the grocery store. That’s because demand for gas and food is inelastic. Producers know you have to buy gas and food every week. It’s not always possible to delay purchases when the price rises. Producers will pass on any of their extra costs. You will buy it at the higher price for a while until you can change your habits.

³The Independent Commission on Banking (pdf): The Vickers Commission proposed a fundamental change in the way that banks in the UK are organised. The main change is that a ‘ring fence’ would separate retail ‘utility ‘ banking work from a range of investment banking and corporate finance activities. It also proposes that banks retain higher capital and loss absorbing reserves than is currently proposed under the Basel rules. The Government has accepted the Commission’s main proposals. Many of the recommendations of Vickers and of the Parliamentary Commission on banking standards (also discussed here) were given effect by provisions in the Financial Services (Banking Reform) Act 2013.

One response to “Cassandra on Money & Debt”