This week on Facebook: Is prosperity and wealth the same thing I asked myself a year ago and concluded that it depended on how you defined each word and who that definition applied to. It’s interesting to note that Investopedia defines wealth in purely financial terms, pretty much as it is now used globally, whereas ‘The Legatum Prosperity Index™’¹ of the Legatum Institute — an international think tank and educational charity which seeks to provide evidence-based solutions for those who would see free, just and flourishing societies — ranks nations over nine areas of potential success or failure:

Do acts of altruism (as say, those that may be promoted by Legatum) introduce better societal changes than those driven purely by the desire to increase personal wealth, which may well be prompted by avarice?

In the post WWII years that I have lived through this question only leads to speculative answers that are so intertwined it becomes impossible to find a definitive one.

Taxation hasn’t effectively changed throughout the centuries leading up to this one — other than in the way it is administered, collected and distributed. It could be assumed that taxes are the primary hindrance to wealth creation and the development of a prosperous society yet as is concluded below, “We will get more of them. But unfortunately we will also get them for all the wrong reasons….”

New taxes mean wealth taxes — for the simple reason that there is not much else left to tax. And in the main, wealth taxes mean property taxes. That is partly because you can collect them, and partly because you can back up the case for them with a huge pile of academic research. Unfortunately we will also get them for all the wrong reasons — not because our governments want to try a new method of encouraging productivity, but because they have lost control of their finances. MoneyWeek — Merryn Somerset Webb

It would seem that taxation has more to do with the politicians that the electorate put into office who, irrespective of their political motivations, would seem to share a common fiscal irresponsibility for which they cannot be brought to account.

There is however a difference between the two, while global wealth disparity may impact on members of a society changes in technology³, the internet and especially social media, now makes those disparities in wealth visible to all. The visibility of this global wealth disparity may, perhaps, create a disillusionment with wealth (per se) and a desire for a more prosperous global society. 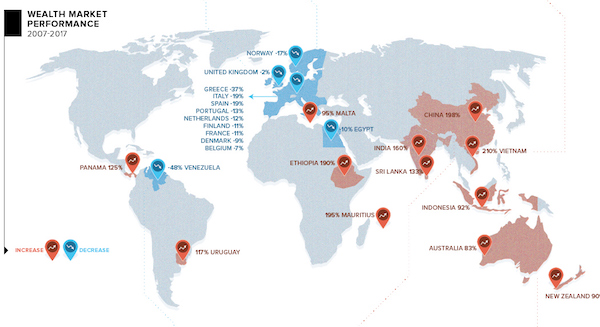 Visualising a Global Shift in Wealth Over 10 Years — click image

The Messy Truth About Income Inequality: The picture that emerges departs from conventional wisdom. Rather than ignoring the plight of the poor, government redistributes hundreds of billions of dollars a year by taxing the rich and transferring the proceeds to low-income households. This routine redistribution tends to be minimised in our discussions of inequality.

How Rich Are You Really? So, if millionaires don’t consider themselves wealthy, where does that leave the rest of us? If we’re unlikely to “feel” rich, no matter how much we earn, is it really worth aspiring to get there at all?

Insanely Concentrated Wealth Is Strangling Our Prosperity: These broad quintile averages obviously don’t put across the realities of the very poor and the very rich; each quintile spans 25 million households. But the picture is clear. The bottom quintiles turn over 40% or 50% of their wealth every year. The richest quintile turns over 5%. For a given amount of wealth, wider wealth dispersion means more spending. It’s arithmetic.

When Economic Growth Doesn’t Make Countries Happier: As an economy grows, that growth is typically not shared equally. Unless redistributive mechanisms stand in the way, the wealthy see a disproportionate increase in per capita income – or in lay terms, the rich get richer, and inequality widens.

The Wealth Paradox (the idea that prosperity makes us more tolerant is a myth according to a new book): The West is currently in the grip of a perfect storm: a lingering economic recession, a global refugee crisis, declining faith in multiculturalism, and the rise of populist anti-immigration parties.

¹The 2017 Legatum Prosperity Index™: The 11th edition of the Prosperity Index reveals a number of surprising global, regional and national trends in economic and social wellbeing, including an alarming deterioration in global security and a widening gap between the most and least prosperous nations.

²The Archaeology of Wealth Inequality (Researchers trace the income gap back more than 11,000 years): Analysing dwellings in Pompeii and 62 other archaeological sites dating back 11,200 years, a team of experts has ranked the distribution of wealth in those communities. Bottom line: economic disparities increased over the centuries and technology played a role.

³Are technology and globalisation destined to drive up inequality? (Understanding inequality and what drives it): Arguably the most prominent effect of technology on inequality is through the increased premium it places on skills. Modern technology substitutes for many of the jobs and tasks traditionally performed by unskilled workers, while acting as a complement to skilled workers.