Some years ago Charles posted  ‘The Boxing Day Hunt – Perfect Entertainment after Christmas Bingeing’ it looked to be an interesting post on a one time favourite rural pastime. I have no idea if fox hunting per se is still a rural pastime, but I do remember ‘the hunt’ and the following story makes a good Christmas Day homage to A. P. Herbert and Norman Thelwell.

The urbane concept of the Hunt being a sport exclusively for a wealthy rural community, has brought about the demise of this sport. While at one time this concept had some merit, for many years this has never been the case, but If you could afford the horse, you could afford the Hunt. If it was beyond your means or your will to do so, then you could join the Hunt as a supporter and this rural pursuit still has many supporters.

While Blighty is blighted with incompetent and delusional politicians, it is comforting to know that the legal profession is always able to cut to the chase and rein in any misinterpretations of the Law. That the Boxing Day Hunt should be regarded as ‘Perfect Entertainment’, reminded me of the Harkaway Hunt case that was brought before His Lordship Mr. Justice Plush in 1930, which required the Court to answer the question: Is Fox-Hunting An Enter­tainment?

His Lordship was given to understand by the defendant – the Master of the Harkaway Foxhounds – that the countryside is subject to the ravages of a cruel and voracious quadruped of the genus Vulpes alopex, commonly known as fox. A creature that preys upon the poultry of the peasants and farmers, causing much distress of mind and monetary loss. To rid the countryside of this pest and so to secure the livelihood of the poultry-keeper and the food-supply of the country, the defendant organised a band of ladies and gentlemen who, like himself, had the interests of British agriculture at heart and were willing to assist him at whatever personal risk. These helpers, loosely called the ‘Hunt’, when mounted on horses, rendered invaluable aid in the intimidation, appre­hension, and destruction of the fox by their mobility and knowledge of wood­craft. Many of them gave up a day’s work in the metropolis making a special journey to the country in order to play a small part in one of his concerted operations against the common enemy.

His Lordship understood the procedure of a hunt was to alarm the fox and dislodge it from its lair by the loud barking of the dogs and the playing of musical instruments.Should the quarry escape into the open country, as, to the chagrin of the hunt, it often did, the dogs at once gave chase, and the horsemen fol­lowed the dogs; other helpers followed in motor-cars along the nearest road, and many of the poor followed on foot. The case for the Crown was that all these persons, although as practical men and women they genuinely desired to rid the neighbourhood of a destructive animal, found a keen enjoyment in the process of destruction for its own sake.

No one ventured to question the single-minded purpose of the defendant, but it was argued that what for him was a crusade had become for his helpers an enjoyable spectacle, excitement, gratifi­cation—in a word, an entertainment.
The witness Turmut strongly supported this view; and he remarked with some force that the number of the defendant’s helpers was in fact far in excess of what was practically necessary or useful, and that it was still increasing. He went so far as to say that many of the helpers did more harm than good, but that portion of his evidence did not favourably impress His Lordship who remarked: If the contention of the Crown be correct, there is here a development not without parallel in other depart­ments of the national life. The Englishman never enjoys himself except for a noble purpose.¹ He does not play cricket because it is a good game, but because it creates good citizens.

The defendant admitted in evidence that he collected an annual tribute from his helpers, from farmers, and others, who habitually attended his operations and enjoy the spectacle of his dogs and horses at their pious labours. These contributions were necessary for the maintenance of the dogs and their keepers and for other purposes; and they are willingly given by the ladies and gentlemen of the Hunt in return for the pleasure or entertainment which the defendant provided. The Crown said therefore that he was liable to pay Entertainment Duty on the sums so re­ceived. 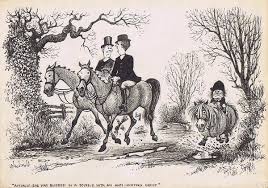 Actually she was bloodies in a scuffle with an anti-hunt group.

His Lordship concluded that unfortunately the defendant’s plea was disposed of by the precedents of the racecourse and the theatre and that in his judgement the conten­tion of the Crown had substance. He held that fox-hunt­ing was an entertainment; that the moneys received by the defendant from the hunters and farmers were by way of payment for that entertainment, and that it must, like other entertainments, make its proper contribution to the public revenues according to law. The Master of the Hunt was, as it were, the manager of a theatre: the Hunt were his audience and the dogs his actors.

If, after remunerat­ing his actors and paying the duty, he was out of pocket, it cannot be helped.

¹ The same thought has been well expressed by the poet Herbert:

No Englishman—’tis one of Nature’s laws
Enjoys himself except for some good cause.