This week on Facebook: Sometime in July I read that the fraud scandal carried out at Lloyds bank took the police six years to investigate at a cost £7 million (excluding the cost of the trial). The case was dealt with by the Serious Fraud Office (SFO) which, regardless of its successes and failures, as part of the public sector, has an impact on a seemingly inexorable budget deficit. It was only casually reading about the Lloyds bank case that I decided to research some of the government’s financial losses¹ for which no one, and especially not a politician or apparently any other public servant is ever held responsible. Certainly some investigative journalism usually results in a story reaching the public, it may even create a furore for a time, but the government know that any furore will eventually subsided and its cause forgotten. Yet if you are taxpayer, and even if you are not, any financial loss by the government has an impact on your well being. For a right or left leaning government, such financial losses become an excuse for increasing government debt and austerity measures.

The fraud investigation by the SFO at Lloyds bank (a bank involved in a government £20bn bailout) resulted in six fraudsters being sent to jail and a possible £100 million compensation paid to small-business victims by Lloyds bank. The fraud occurred at HBOS between 2003 and 2007 but it wasn’t until 2008, when encouraged by the government of the day Lloyds TSB merged with HBOS. The £7 million cost of the investigation by the SFO and cost of the trial itself is ultimately taken from taxation, any government maladministration at any point in this affair is unlikely to be revealed.

The government didn’t just have 100-odd billion sloshing around to bail out the banks. It had to borrow the money. It did so by issuing interest-bearing government bonds called gilts. Channel 4 News — 2015

Where government maladministration is proven as happened in the case of Equitable Life policy holders and resulted in tax funded compensation, there is no evidence that it resulted in any financial hardship for those responsible. Quite the opposite, when in  2010 compensations of less than 1/3 of that expected was offered, political capital was being made out of this debacle and it still is. Yet more maladministration by a different government was made when it was  revealed that it had destroyed the details of policyholders. It would appear that the cost of any financial and administrational incompetence by politicians and other public servants — even when maladministration is proven — it is not classified as misfeasance² and so carries no penalty.

Of the £4.3bn that our Government has acknowledged was policyholders’ losses directly attributable to regulatory failure, less than 35% of that sum was committed in 2010 as compensation. While 39,000 with-profits annuitants received (theoretically) 100% of their relative losses, over 900,000 pension savers have thus far received derisory compensation of just 23% of their loss. A gross unfairness remains. EMAG — 2017

Politicians use the taxpayer as a milch cow in support of political party objects, regardless of the cost to the exchequer.  A political objective is transposed into a financial rationale that justifies the losses to be borne by the taxpayer. In 2015 the Chancellor of the Exchequer sold the taxpayer’s stake in the Royal Bank of Scotland (RBS) at a loss of £1.1bn. To be strictly correct the chancellor of the exchequer didn’t sell the share, the UK Financial Investments Limited (UKFI) did. A company set up at yet another cost to the taxpayer, but which adds further protection to politicians against charges of misfeasance.

UK Financial Investments kicked off the bank’s privatisation with a £2.1bn sale of a 5.4pc stake in RBS at 330p per share, compared with a bailout price of 502p.  The Telegraph — 2015

The HS2 could be called a government backed gravy train, labelled as ‘an ongoing nightmare’ so monstrous that most people simply cannot believe it. When the government announced £6.6 billion of contracts for the first phase of HS2 the General Secretary of ASLEF (the train drivers’ union) said franchises were now being sold, like commodities, to groups that did not even have to bid for them. The government has refused to publish a recent report into the controversial HS2 rail route now estimated to cost the taxpayer £104billion.

“It is the most extravagant infrastructure project in British history—but nobody can say why we need it. How did HS2 ever get so far?” The Guardian — 2016

Political folly³ is something the electorate seems inured to and taxation something that it has — largely — learned to live with, only the latter becoming a real considerations at the time of an election. Political folly is blithely accepted when politicians increase the fiscal deficit to fund vanity projects while, at the same, advocating austerity. So we come to some the UK government’s failed projects. I don’t use the word finally as this post has only addressed perhaps the largest of these government financial failures that are funded by the taxpayer.

For 30+ years, Western countries have been papering over the decline in living standards by issuing debt. In its simplest rendering, sovereign nations spent more than they could collect in taxes, so they issued debt (borrowed money) to fund their various welfare schemes. Zero Hedge — 2015

Monday A historic fraud scandal is going to cost Lloyds another £100 million: The fraud, which saw six people jailed earlier this year for almost 48 years following a six-year Thames Valley Police investigation, has already cost Lloyds around £250 million and left small business owners struggling. The fraud occurred at HBOS between 2003 and 2007. Lloyds merged with HBOS during the financial crisis.

Tuesday It’s not an Equitable Life, Henry: As we all now know, Equitable was a major accident waiting to happen, a situation aggravated by light-touch (non-existent) regulation from an array of useless government departments. 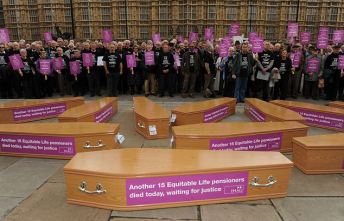 Wednesday NAO nearly doubles size of loss on Government’s RBS stake sale: There is growing acceptance that the taxpayer will suffer a big loss on the shareholding, with Chancellor Philip Hammond in April admitting to MPs that “we have to live in the real world”. He said: “Our policy remains to return the bank to private hands as soon as we can achieve fair value for the shares, recognising that fair value could well be below what the previous government paid for them.” The NAO’s calculation of an even higher break-even price raises the spectre of the taxpayer suffering an even bigger loss than previously anticipated.

Thursday Would you invest your money in HS2? The main political parties have all decided that nonetheless it should go ahead with borrowed public money. Even more remarkable, they evaluate the finances of the project without putting in any cost of capital. They claim it will be a good investment, but they do not even ask themselves will it generate sufficient money to pay the interest on the borrowings, let alone eventually pay the money back. 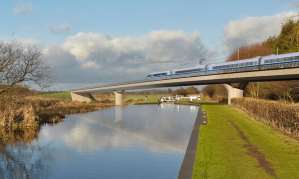 Friday Biggest UK Government Project Failures: Frequently, the reason is poor planning, or workers not sticking to the plan, which leads to bad communication, unrealistic timelines and the overlooking of important details. But, as any office motivational poster will tell you, you won’t learn anything if you don’t confront failure. 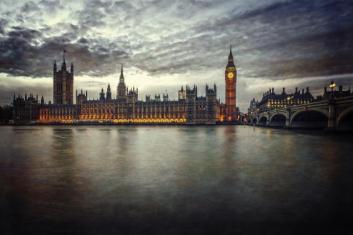 In Britain, politicians and senior officials are also disparaged for the simple reason that our governments get things wrong, sometimes very badly wrong. They blunder, probably increasingly, probably on a greater scale than at least some comparable countries, and certainly unnecessarily and too often.