This week on Facebook: My attention was caught yet again by shills offering fantastic returns on a financial investment. It could be harsh perhaps to use the definition of a shill as, an accomplice of a confidence trickster or swindler who poses as a genuine customer to entice or encourage others [SOED]. However, it’s implausible the think that a shill is anything other than, a person who pretends to give an impartial endorsement of something in which they themselves have an interest [SOED]. Of course the term shill, when used in this context and especially in a derogatory sense, is sure to raise a lot of resentment, especially when shills are simply responding to the volatility of an economic cycle that is the inevitable result of a fiscal policy adopted by a public administration. In today’s world the euphemism financial crisis is used to disguise actions taken by the public administration that exacerbate the economic cycle and inevitably fail to provide a stable economy. 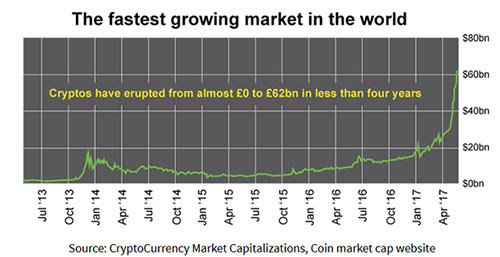 The shills continue to offer me untold wealth, to the point of offering a seed corn investment. I have no doubt that given the rise in value of cryptocurrency some people have made a fortune, nor do I doubt that that there are still fortunes to be made. I’m reminded of an incident from my past, which I also failed to take advantage of — this time as a shill:

A plump, bearded character from New York by the name of Bernie Cornfeld set up an offshore outfit known as Investors Overseas Services, based in Switzerland. Attracted by promises of huge returns, people all over the world poured billions of pounds and dollars into Cornfeld’s Dover Plan. But, when the stock market dived in 1970, the shortcomings of unit-linking were cruelly exposed. Unlike with-profits policies, there were no reserves to prop up returns during the bad times, and investors’ hopes of riches evaporated. Worse still, Cornfeld and his salesmen, many of whom had become millionaires, had been living the high life on the back of the enormous commissions they had milked from peoples’ investments. Investors pulled out of the Dover Plan in droves and eventually stories began to emerge of false accounting and dubious investments. The Telegraph

Of course a cryptocurrency is not the Dover Plan but there are many similarities particularly for the shill. However, the supply of genuine cryptocurrency like the Bitcoin is limited by the data mining process it uses and is made secure by the use of a blockchain. Data mining for a genuine cryptocurrency could be regarded as being analogous to mining for gold, with both the cryptocurrency and gold having an uncertain economic life.  The analogy could end when the durability of gold held securely by an individual is set against an individual’s ability to hold a block chain securely, but this situation is changing as did the wealth accrued by those who simply facilitated a gold mining activity.

Indications are that public administrations will develop their own cryptocurrencies to support their fiat money worlds while global trade and the currency market will continue to measure the value of these fiat cryptocurrencies against the more tangible value of another commodity. Perhaps the rising cryptocurrency marks the beginning of a cashless society. Maybe even the end of  fractional reserve banking and the end of banking entirely however, banking is another issue. While the global response to the failure of the gold standard provides some clues to future, the rise of cryptocurrency is already a global game changer, which a public administrations’ fiscal policy will not allow to grow unfettered.

Tuesday 20/6/2017 The Crypto-Currency: It appeared, though, that Nakamoto was motivated by politics, not crime. He had introduced the currency just a few months after the collapse of the global banking sector, and published a five-hundred-word essay about traditional fiat, or government-backed, currencies. “The root problem with conventional currency is all the trust that’s required to make it work,” he wrote. “The central bank must be trusted not to debase the currency, but the history of fiat currencies is full of breaches of that trust. Banks must be trusted to hold our money and transfer it electronically, but they lend it out in waves of credit bubbles with barely a fraction in reserve.”

Thursday 22/6/2017 Central Banks Are Driving Many to Cryptocurrencies: The reaction of the cryptomarket to the Federal Reserve announcement provides evidence that cryptocurrencies are seen as a safe-haven investment during times of significant fiat currency dilution. As I wrote for Forbes Austria in April, this is why the demand for Bitcoin is going up in countries that are demonetizing their fiat currencies, such as India and Venezuela. Following the demonetization of the 500 and 1,000 rupee banknotes in November of last year, the price of Bitcoin on India’s largest Bitcoin exchange, Unocoin, shot up to $818 while American exchanges quoted the exchange rate as $709 per Bitcoin. Similarly, Surbitcoin, Venezuela’s largest Bitcoin exchange, saw an increase from 450 accounts in 2014 to over 85,000 in 2016.

Friday 23/6/2017 The Rise of Cryptocurrency Ponzi Schemes: Last month, the technology developer Gnosis sold $12.5 million worth of “GNO,” its in-house digital currency, in 12 minutes. The April 24 sale, intended to fund development of an advanced prediction market, got admiring coverage from Forbes and The Wall Street Journal. On the same day, in an exurb of Mumbai, a company called OneCoin was in the midst of a sales pitch for its own digital currency when financial enforcement officers raided the meeting, jailing 18 OneCoin representatives and ultimately seizing more than $2 million in investor funds. Multiple national authorities have now described OneCoin, which pitched itself as the next Bitcoin, as a Ponzi scheme; by the time of the Mumbai bust, it had already moved at least $350 million in allegedly scammed funds through a payment processor in Germany.

2 responses to “The rising cryptocurrency”