Back to the future?

The 2017 General Election resulted in the following statistic to which caught my attention and an article by a blogger who calls himself Archbishop Cranmer giving it some rational (perhaps there is some significance in choosing the name of a Tudor protestant martyr).  Cranmer’s article on the outcome of the general election votes for Labour provides a right wing take on the statistic crediting Corbyn’s achievement. However, it is a misleading statistic in the sense that while it shows a significant increase in Labour’s vote share at the 2017 general election, as in 2015 the vote swing to Labour over the Conservatives was not enough to win them the election. In the days of a two party state in British politics, Corbyn’s increased vote share would have translated into the election victories achieved by Attlee in 1945 and Blair in 1997. So why didn’t it? 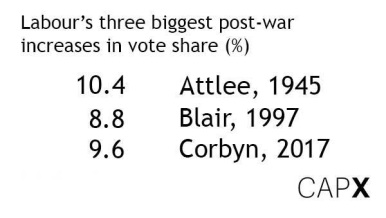 I was unable to find a swingometer that showed the results for last week’s general election, the reason probably being that statistically a swingometer no longer reflect’s  the outcome of an election when there are devolved parliaments and constituency voting is not distributed evenly. This is especially true now that more than two political parties are in contention for government at both devolved and national levels. When measuring the seats gained by Labour and those lost by the Conservatives in 2017 the election result makes the outcome statistically similar to that of the 2010 general election, which resulted in a  Conservative and Liberal Democrat coalition government.

The 2017 general election vote has resulted in a hung parliament and it could be the case that Corbyn’s Labour party has been hoisted on the petard of Blair’s New Labour devolution policies. Certainly the share of the votes cast in general elections (including the popular vote of the Liberal Democrat party) has, since devolution, resulted in the gain of parliamentary seats by other political parties. If the 2017 general election result points to anything, it is the demise of the swingometer as an election forecast tool and the success attributed to the YouGov model. 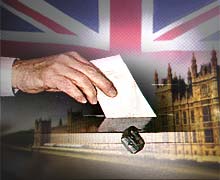 The Washington Post provides an article with the title The U.K. election, explained writing: In April, May reneged on earlier promises to not hold an early election and announced that the country would vote for a new government on June 8. Analysts have pointed to various factors in May’s decision, including the possibility that May could extend the Conservatives’ majority in Parliament as she negotiates Britain’s exit from the E.U. Another likely factor was that Britain’s next election was originally due to be held in 2020 — possibly in the middle of complicated Brexit negotiations — so calling an early election helps simplify the timing. Under Britain’s Fixed-term Parliaments Act of 2011, elections are supposed to be held every five years, but May was able to call the election earlier after getting the backing of the opposition Labour Party.

The Constitution Unit offered an article with the title Managing the new parliament — some challenges for Theresa May’s minority government writing: Following weeks of speculation about the general election result, few were contemplating the prospect of a minority government led by Theresa May. The Prime Minister proposed the election in the clear expectation of an increased House of Commons majority, citing (in a rather exaggerated manner) difficulties in parliament. Instead she now doesn’t have a majority at all.

One response to “Back to the future?”