This week on Facebook: My attention was caught by an article linking cannabis and ageing. I never paid a great deal of attention to the issue of forbidden drugs and legislation but age has not only enfeebled my body but also my brain.  Still, it was curiosity that drew me to read the article rather than any desire to smoke pot.

My drug of choice is alcohol, having observed the often absurd actions taken over the regulation of alcohol sales I am left wondering at the ability of any public administration to deal with issues that have a negative effect on fiscal policy and are driven by a political agenda. A lot of public money is spent on a war on drugs , which has — for the most part — failed to solve the problems that drugs are perceived to inflict upon a society¹.

An article about the use of Afghan opium for NHS drugs seemed a good solution to an increasingly global problem, but apart from the technical problems there are economic and political problems, which together make this particular drug problem seem insurmountable. Drug use — in whatever form — is not a new problem, nor are the regulations applied by a public administration, which constantly fail to address the real social issues and inevitably lead to an increase in the national and global markets for the illegal supply of them.

Monday 29/5/2017¹ Daily Dose Of Cannabis May Protect And Heal The Brain From Effects Of Ageing: Researchers at the University of Bonn and Hebrew University have discovered that low, regular doses of tetrahydrocannabinol (THC), one of the main active ingredients or cannabinoids found in marijuana, may help to keep our brains from ‘slowing down’ as we get older.

Tuesday 30/5/2017 How Close is the United Kingdom to Legalising Cannabis? An interesting tidbit of information sheds light on the murky past of cannabis in the UK. Although it was deemed illegal in 1928 as an addition to the Dangerous Drugs Act of 1920, doctors were allowed to prescribe cannabis for various medical ailments until 1971. In 1971, the Misuse of Drugs Act created the Class A, B, and C classification systems as a means to control substances. Cannabis was now classified as a Class B drug along with amphetamines, with less severe penalties than those for harder drugs such as heroin or LSD.

Wednesday 31/5/2017 How British Weed Growers Are Avoiding Prosecution: James, a grower who has been raided before, has recently registered his garden under the tagged collective model. He told me: “This scheme allows us to show that we are not commercial growers if we do get another knock at the door. And it shows the authorities that whilst cultivation is illegal at the moment, we are trying to do it in as professional a manner as possible and be responsible.” 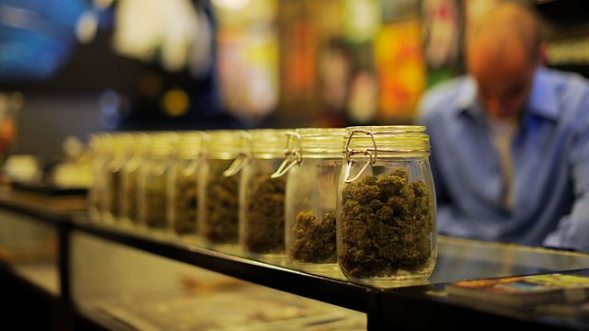 What Happens When You Legalise Cannabis? click image for podcast

Thursday 1/6/2017 The right way to do drugs:  Those (including this newspaper) who have argued that legalisation is better than prohibition will welcome the beginning of the end of the futile war on weed. Cannabis accounts for nearly half the $300 billion illegal narcotics market, and is the drug of choice for most of the world’s 250m illicit-drug users. Legalising it deprives organised crime of its single biggest source of income, while protecting and making honest citizens of consumers.

Friday 2/6/2017 Why Britain Isn’t Going to Legalise Cannabis Any Time Soon: In March of 1998, an estimated 15,000 to 25,000 people light up in Hyde Park for a pro-legalisation rally that makes its way to Trafalgar Square. Within years, the campaign and protest are basically all but forgotten, and every attempt since to bring lawmakers around is essentially shut down in its infancy, despite the rational points being made.

A growing market — The domestic cultivation of cannabis (pdf): Traditionally cannabis has been imported into the country by drug traffickers, but rapid changes are occurring. There is no precise information on the extent of home cultivation, but it is clear that it has increased steeply over the past decade. Cannabis cultivated in England and Wales may now account for half of all consumption, and much of this domestically cultivated cannabis will be home-grown for personal use.

One response to “A little weed!”