In Praise of Forgetting

This week on Facebook: I was going to use an article on David Rieff’s book/essay In Praise of Forgetting: Historical Memory and Its Ironies in my post on forgetfulness but decided against its inclusion. What I did find interesting though were the reviews of Rieff’s short work received (it is clearly an essay rather than a book). There is — to my mind — a significance in the references to historic memories that the authors selectively chose to include in their reviews and in those that they did not mention. Particularly the impact that their education had in fostering historical memory and the contemporary ironies it creates. 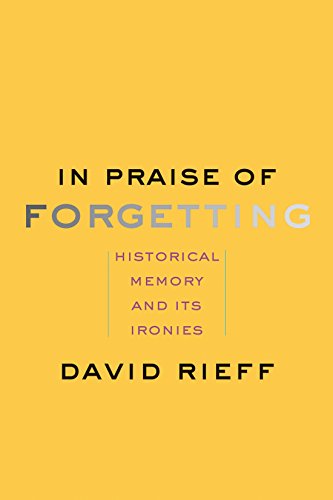 The Italian proverb Chi sputa in su, lo sputo gli torno sul viso, which translates as If you spit up in the air it will hit you in the face sums up the point that Rieff is making. We should be grateful to thinkers and writers like Rieff for pointing out the unintended consequences of spitting up into the air. However, forgetting and forgiveness comes at a price and deep resentments are difficult to overcome. More so when exploited by those who would use them for their own political advantage. The key to any reconciliation between such resentments is in not forgetting but in an objective understanding. A forlorn issue when the inclusion of perceived truisms lead to the ironies that the emotional acceptance of historic memory engenders.

I found an insight into Rieff in the article Rieff Encounter written in 2005. His latest book In Praise f Forgetting was published in 2016  and reviewed in the following articles that year. Five reviews from 5 countries reviewing the same book/essay, articles that are covertly polemics (a description that Rieff  may not disagree with). As William Armstrong in the Turkish Hürriyet Daily News¹ (a foreign columnist writing for a foreign newspaper) concludes: Rieff’s recommendations are attractive but sadly unrealistic. The world, when resorting to historical memory and its ironies, is condemned to forever spit into the air.

Patriotism is the last refuge of a scoundrel. Samuel Johnson (1775)

Monday 3/4/2017 The New York Times: In Praise of Forgetting is about our collective memories: how we remember our national histories and argue about our shared past. Rieff contends that these collective remembrances are self-serving, often fraudulent and frequently dangerous. Sometimes, he thinks, we would be better off simply forgetting the grudge-filled chronicles and getting on with living our lives.

Tuesday 4/4/2017 The Irish Times: A few minor Irish errors (placing both the Rising of Easter Monday and the Good Friday Agreement on Easter Sunday; calling William of Orange’s ascension to the British throne “peaceful”) might raise hackles, but, while not aimed directly at the ongoing 1916 centenary, Rieff’s scathing criticism of commemoration cuts uncomfortably close to home bones.

Wednesday 5/4/2017 The Times — London: In taking the side of forgetting, Rieff is swimming against the tide of piety that repeats George Santayana’s old saw that those who cannot remember the past are condemned to repeat it. It is equally true, Rieff argues, that those who can’t forget the past will be imprisoned by it. Rieff’s essay is a frontal attack on what he takes to be the moral absolutism of the modern human-rights movement and its axiomatic belief that remembering — and the justice that goes with it — is always better than forgetting, and the impunity that usually accompanies it.

Thursday 6/4/2017 Australian Book Review: David Rieff sees more value in forgiveness than I do. I am of the belief that some acts, and the policies that allow them to occur, are unforgivable, such as the atrocities under apartheid, those committed by the Nazis, and the slaughter being committed by ISIS now. Nelson Mandela recognised this when he established the Truth and Reconciliation Commission – not a Truth and Forgiveness Commission. There can be understanding and reconciliation, there can be a future where past enemies live together in peace, and this can occur without having to forgive the unforgivable (and thereby act in bad faith).

Friday 7/4/2017  Hürriyet Daily News¹ — Turkey: The book also makes for interesting reading in Turkey, where collective identity is very powerful, memories are long, and where battles over how to shape that memory are fierce. Old grievances are constantly stirred for crude political gain. The question of which historical events should be commemorated (and how) is a turf-war between various social groups. Next month, Turkey’s conservative Islamist government will (once again) mark the 1453 Ottoman conquest of Istanbul with great pomp, after last week sidelining (once again) the republican National Sovereignty Day on April 23.

2 responses to “In Praise of Forgetting”