This week on Facebook: An acquaintance in the USA remarked, with barbed facetiousness, on political correctness (PC). Having decided to address PC this week I was surprised (although I shouldn’t have been) at how difficult it was to find articles that weren’t accusing the US presidential candidate Donald Trump of incorrect PC in very non PC terms. Even dismissing these articles, I didn’t find many that objectively addressed the PC issue but there were plenty that invoked the PC argument to suppress freedom of expression. Yet again I found myself returning to a previous post of mine in which  the then Director of Public Prosecutions (DPP) gave a speech on Free Expression and the Rule of Law, remarking that:

“An opinion, in and of itself, cannot be criminal. Ever. Just as the law should not attack thought, it should also be slow to proscribe speech or expression simply because it is capable of causing offence. If you want to be able to say things that others don’t like or find challenging, you need to be willing to hear things that you don’t like”.

Monday 22/8/16 Political Correctness Redux: “Political correctness” has been in the news a lot lately, in relation to gender-neutral bathrooms, Donald Trump’s attacks on Muslims and immigrants, and a strikingly wide array of other issues.But what are people talking about when they bring up political correctness?

Tuesday 23/8/16 Give A Big Cheer For Our Political Correctness: I continue to distrust the sensibility, still alive and strong, that automatically rails against “political correctness” – with individuals not merely objecting to being directly inconvenienced by PC forces, but complaining in a more generalised way about perceived attacks on their free speech and liberties. These are the types who like to cast themselves as plain-speaking sensible souls, who’d call a garden implement a garden implement, when there’s frequently very little evidence of this.

Wednesday 24/8/16 A Political Correctness War That Never Really Ended: For those not familiar with the term, PC refers to politically correct — a derogatory description coined in the 1990s to label those contending, in part, that language was a weapon used by the powerful to deny the interests of the oppressed. Although the term gained national awareness, the most ferocious debates occurred on college campuses and involved student speech codes and mandated gender inclusiveness.

Thursday 25/8/16 Can We Start Taking Political Correctness Seriously Now? — It is possible and for many sympathisers on the left, convenient to dismiss these sorts of incidents as just so much college high jinks. “College students have been saying stupid things since the invention of college students,” argues Daniel Drezner, in a passage that attracted widespread support on the left. It is probably true that a strange and sudden new hypersensitivity among young people has produced a widespread expectation of a right to be protected from offense. It is also undeniably true that outbursts of political correctness disproportionately take place in campus settings.

Friday 26/8/16 The Science Behind Political Correctness, Explained: Importantly, McLuhan did not see the global village as a peaceful place. In fact, he predicted it would lead to a new form of tribalism, and result in a “release of human power and aggressive violence” greater than ever in history, as long separated —and emotionally charged—cultural norms would now constantly intermingle, clash and explode. Clearly, political correctness is a product of that cultural collision. Arguments that cannot be decided by rational debate—and cultural beliefs never are—can only be won by cultural dominance. What makes the stakes even higher is that, as we will see, majorities don’t merely legislate they also influence, making activism around cultural issues a dire political necessity.

Political Correctness (noun)
The avoidance of forms of expression or action that are perceived to exclude, marginalise, or insult groups of people who are socially disadvantaged or discriminated against. Oxford Dictionaries

Searching for articles on political correctness (PC) I came across the following quotations attributed to Voltaire: Opinions have caused more ills than the plague or earthquakes on this little globe of ours. Perhaps nullified by Voltaire also saying: A witty saying proves nothing. One quotation attributed to him produced the following meme that seems apt to this PC theme. 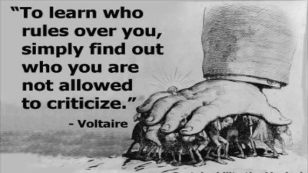 While the quotations is very Voltairean it is attributed to Kevin Strom.

To determine the true rulers of any society, all you must do is ask yourself this question: Who is it that I am not permitted to criticise. Kevin Strom

In the media and especially the social media Kevin Strom is presented as a Neo-Nazi. This may well be true, and he may have intended his quotation to be especially applicable to those states with ultra left-wing governments but it applies to all states. Increasingly those states which claim to be democratic suppress the freedom of expression that the DPP talked about in his address on free expression and the rule of law.

This led me to an article in the Guardian (Australia) — a left of centre newspaper that likes to present itself as having a politically correct face — with the title Cory Bernardi Mistakenly ‘Quotes’ Voltaire On Twitter With Neo-Nazi’s Line.  Author of ‘The Conservative Revolution’, Cori Bernadi is an Australian politician and a Liberal Party member of the Australian Senate.

Bernardi did misquote Voltaire but I have to ask myself, What was the purpose of connecting Cori Bernardi to a quotation attributed to Neo-Nazi Strom? Are readers meant to infer that misquoting Voltaire and quoting Strom exposes Bernardi as a Neo-Nazi?

Of course the writer of the article is able to claim that no such connection was implied, the article being about the intent in attributing quotations to Voltaire and a critique of Bernardi’s extreme right wing views. Thus the author can disclaim any responsibility for the readers inferences. PC equates — in most cases — to the suppression of freedom of expression and The Guardian newspaper should remain free to publish such articles, yet Brendan O’Neill gets vilified for opposing censorship in Australia.

My post Bullshit — A Study remarks that vagueness and ambiguity purposely intends to attribute a deep meaning coincident with the acceptance of the bullshit’s profundity. This concern for profundity reveals an important defining characteristic of bullshit: In that it attempts to impress rather than to inform — to be engaging rather than instructive. Despite the lack of direct concern for truth pseudo-profound bullshit relies on being verisimilous, in that it must be believed to be true for the acceptance of any perceived comprehension.