In 1837 Queen Victoria inherited a monarchy that was not popular and her advisers belonged to a governing plutocracy. The Peterloo Massacre of 1812 and the recent Newport Rising of 1839 resonated amongst the working classes. The 1832 Reform Act deliberately limiting voting rights to a privileged few, and the 1834 Poor Law deliberately extending poverty to a less privileged many, simply reinforced the existing social inequalities. Continual civil unrest fuelled by the suffering and distress amongst the working classes eventually culminated in the Chartist’s General Strike of 1842.

A young Victoria was advised to write The 1842 Queen’s Letter, appealing for public support to alleviate the plight of the indigent. The monarch was to direct the Archbishop of Canterbury to have the The Queen’s Letter read out in all churches, while urging parishioners to donate generously to a relief fund. 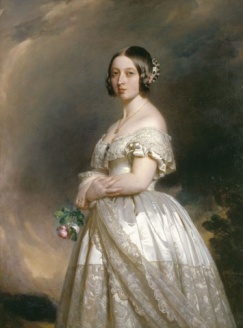 Selected Tweets from Hansard – The House of Lords 1842

Lord Kinnaird(Rossie)@kross We should discuss The Queen’s Letter calling on the clergy to make subscriptions for the relief of the national distress.

The Duke of Wellington@wellin You should be perfectly certain that such a letter exists.

Lord Kinnaird (Rossie)@kross I have a copy of the letter about which the Cabinet advisers claim ignorance.

The Marquess of Lansdowne@malade  The letter should be issued, but not only to the Established Church. Collections should be made all places of worship.

The Earl of Minto@emo On a former occasion, when a similar step was taken, the Government of the day released a considerable quantity of corn from bond.

The Duke of Wellington@wellin I have no knowledge of the Government intending to release corn out of bond, it would be an illegal assumption of power by the Government.

The Duke of Richmond@rich People want money, employment, not corn. Releasing corn out of bond would place agriculturists in the same distress as the manufacturers.

Earl Fitzwilliam@efitzm However much the clergy may exert themselves in their respective parishes, the sum received would be insufficient.

Lord Wharncliffe@whiffe The distress is not permanent and I look forward to a revival of trade. No great relief could be expected from the proposed collections.

Earl Fitzwilliam@efitzm This distress is due to the decline of the manufacturing interest of the country and if permanent, why assume a temporary distress?

The Bishop of London@bolony In 1825 great distress among the manufacturers in London was relieved by the same measure, in conjunction with a public subscription.

Lord Wharncliffe@whiffe If funding by he wealthier classes fails, only then should other sources be found. The unemployed can’t expect their full wages to be paid.

The Bishop of London@bolony The appeal funds will mitigate the distress and will teach the lower orders that those above them are not insensible to their sufferings.

Lord Kinnaird (Rossie)@kross Who would be entrusted to distribute  the funds expected to be collected by The Queen’s letter?

The Duke of Wellington@wellin Money raised by The Queen’s Letter would be handed to the Manufacturers Distress Relief Committee (pdf).

The Earl of Radnor@eran A fund collected and distributed locally is not the same as government funded relief due to lack of trade in manufacturing districts.

The Duke of Wellington@wellin It is not government practice to make advances of public money and I am against the granting of such.

The Earl of Radnor@eran Any government funding made without the vote of Parliament, from 1826 to the present time, should be returned.

The Duke of Wellington@wellin I have no objection to monies being returned but I am not aware of any being given.