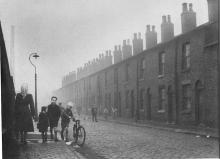 I can remember many things from those years during WWII but not a single Christmas. The war years were spent living  in the city of Chester with my grandparents and my mother. We all lived in a terraced house with no electricity, one cold water tap in the scullery and an outside toilet. The dolly tub became a bath when set in front of the black-lead grate, where a large kettle – black from sitting over a coal fire – heated the water. Precious hot water, not to be squandered in a single use of the dolly tub.

After a very brief return home from the war, my father was then sent to Palestine. We had now moved into a married quarter on an RAF station near to Chester. A dream house, as grand to me as those only seen at the cinema. It had electricity in every room, hot and cold water on tap, my own bedroom, a bathroom in which there was a white enamelled bath (not zinc) a wash basin – both having hot and cold taps – and gracing one corner a toilet with a lid. Gone was the black-lead grate, instead there was a kitchen – not a scullery – and a ‘​front room’ we actually used. When my father returned from Palestine in time for Christmas 1947, it was the first Christmas that I can really remember.

That Christmas I was given a book written by Frederick Marryat called Mr Midshipman Easy.  I spent every available opportunity that  Christmas day reading Mr Midshipman Easy, finishing it that same day. Cementing my love for books and creating a desire to ‘go to sea’. Some sixty-six years later it turned out to be surprisingly difficult compiling a Christmas offering here. Resorting to the internet I found an interesting article from December 2007 in the Commentary Magazine. Written by Stefan Beck it had the title Top Five Christmas Books.

These may of course not be your top five, but they are an interesting Christmas collection. I trust that Stefan Beck won’t mind the liberties I have taken with his original piece, especially my changing the links to ones that provide a free read for Christmas and adding, throughout this post, some ‘linked’ surprises.

Casting himself as a thinly disguised Scrooge, Christopher Hitchens in  Bah Hannukah is, Beck suggests, wrong  saying that religion has poisoned anything by giving us these annual opportunities to spend time with family and friends; adding that he could not do without his favourite Christmas literature and recommending the following  top five.

How to Be Topp by Geoffrey Willans and Ronald Searle, its last chapter, “Ding-Dong Farely Merily For Xmas,” provides a view of Christmas as seen by Nigel Molesworth:

“Personaly i do not care a d. whether Marley was dead or not it is just that there is something about the xmas Carol which makes paters and grown-ups read with grate XPRESION, and this is very embarassing for all. It is all right for the first part they just roll the r’s a lot but wate till they come to scrooge’s nephew. When he sa Mery Christmas uncle it is like an H-bomb xplosion and so it go on until you get to Tiny Tim chiz chiz chiz he is a weed.

A Christmas Memory by Truman Capote.

But one way and another we do each year accumulate Christmas savings, a Fruitcake Fund. These moneys we keep hidden in an ancient bead purse under a loose board under the floor under a chamber pot under my friend’s bed. The purse is seldom removed from this safe location except to make a deposit or, as happens every Saturday, a withdrawal; for on Saturdays I am allowed ten cents to go to the picture show.

A Child’s Christmas in Wales by Dylan Thomas.

One Christmas was so much like another, in those years around the sea-town corner now and out of all sound except the distant speaking of the voices I sometimes hear a moment before sleep, that I can never remember whether it snowed for six days and six nights when I was twelve or whether it snowed for twelve days and twelve nights when I was six.

Holidays on Ice by David Sedaris. “Season’s Greetings to Our Friends and Family!

I was in a coffee shop looking through the want ads when I read, “Macy’s Herald Square, the largest store in the world, has big opportunities for outgoing, fun-loving people of all shapes and sizes who want more than just a holiday job! Working as an elf in Macy’s SantaLand means being at the centre of the excitement….”

A Christmas Garland by Max Beerbohm. An anthology of seventeen literary parodies, each on the subject of Christmas.

“Reach me that ammonia bottle, d’you hear?” answered the white man. “This is a pretty place you’ve brought me to!” He took a draught. “Christmas Day, too!”  The Feast (Joseph Conrad)

“That is why for nearly two thousand years mankind has been more glaringly wrong on the subject of Christmas than on any other subject.” Some Damnable Errors About Christmas (G. K. Chesterton)

“That Shakespeare hated Christmas—hated it with a venom utterly alien to the gentle heart in him—I take to be a proposition that establishes itself automatically.” Shakespeare and Christmas (Frank Harris)

A Christmas Carol by Charles Dickens

I HAVE endeavoured in this Ghostly little book,to raise the Ghost of an Idea, which shall not put my readers out of humour with themselves, with each other, with the season, or with me. May it haunt their houses pleasantly, and no one wish to lay it.

Their faithful Friend and Servant,

One response to “A Christmas Remembered”