The other evening I watched a repeat of an early Lewis episode on the television, with the title Whom the Gods Would Destroy — they first make mad — an episode replete with allegory and allusion to Greek mythology. While no mention was made that the Ancient Greeks counted hubris as a deadly sin the spirit of Hybris was ever present, a sure means of inviting Nemesis to bring disastrous punishment.

Hubris is gratuitous insolence: the deliberate infliction of shame and dishonour on someone else, not by way of revenge, but in the mistaken belief that one thereby shows oneself superior. Aristotle – Rhetoric 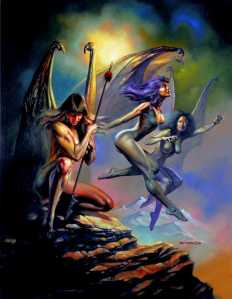 In my last post I mentioned The Newsroom, a political television series from the USA. The content of this weeks episode I’ll Try to Fix You was that of hubris embedded in hubris. The protagonist was introduced to a gossip columnist who expressed pleasure in her ability to inflict shame and dishonour on someone else through her column, he then dated someone who took vicarious pleasure in actually doing such. Coupled with this, he then dated someone who packed a gun in her purse, at some point – on each occasion – expressing gratuitous insolence and a mistaken belief of superiority over all three. Falling himself into the hubris trap; inviting Nemesis to bring disastrous punishment – which in the form of Jane Fonda – she did. Or was it merely coincidence that there were three furies (Erinyes)?

Whatever the medium, it seems that it must service vicarious pleasures and in that our own hubris. The protagonist in The Newsroom , endowed with a mission to be a seeker of wisdom and truth, is (perhaps) unaware of his own hubris.

Such hubris may apply to Aaron Sorkin who wrote this episode of The Newsroom, unless irony is intended. Having berated a gossip columnist for her nefarious ‘news column’, the protagonist then sets out to inflict shame and dishonour on others. The problem with gossip openly expressed is that it is usually an embellished truth, which easily  becomes transposed into  fake news.

Finally: back to Lewis and a note found with ‘Adrenochrome‘ written on it. In the context of the episode, something that may be attributed to ‘artistic licence‘, in that it represented a deviation from Greek Myth allusions. Adrenochrome was not ‘the ultimate high’ of Greek Mythology but was  based on  an account written by Hunter S. Thompson in his book Fear and Loathing in Las Vegas. In the book it is derived from a living donor’s adrenal gland, a process that killed the donor in Lewis. This provided the dénouement to the episode, which brought together the Dionysian theme and the antagonist’s nemesis in yet another allusion. In this case to Actaeon the hunter, who was turned into a stag by Artemis and was then hunted, attacked and killed, by his own dogs. There would seem to be some debate as to whether or not this fate was brought about by hubris in his boasting of his hunting skills, or by his voyeurism in watching Artemis bathe naked.

Could I see an allusion to the virginal Artemis in the antagonist’s wife, or is this simply my hubris?

Is that  the Erynes I hear approaching!

One response to “Hubris”