Freedom is not a whimsicality!

In 2012 an amusing article with the header  To swim, perchance to drown, is an undeniable human right appeared in The Telegraph. Written by Boris Johnson  the Lord Mayor of Greater London the nub of the article was the important point of individual freedom and democracy.  In leading with the suggestion that The Port of London Authority (PLA) should take a running jump into the Thames – the point was made that the PLA have now banned swimming in the Thames without a permit, and claiming that the ban was brought into force without any democratic consultation.  As the PLA is not accountable to the Mayoralty, this may have prompted Boris to say:

“We don’t need some bunch of well-meaning quangocrats to click their fingers and decide that sentient adult human beings must be kept out of the river. We don’t need them to tell us that you will find currents and eddies and boats. Boats! On the river! Well I never! We don’t need advising that swimming in the strong tidal flow is risky – it’s blinking obvious.  But if people want to swim in the Thames, if they want to take their lives into their own hands, then they should be able to do so with all the freedom and exhilaration of our woad-painted ancestors”. 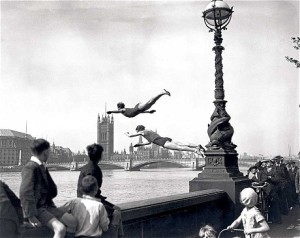 Quite! But throughout his article Boris misses the fundamental point that Londoners are not free to ‘jump into the Thames on the slightest whim’. Indeed had this happened during the  Thames Diamond Jubilee Pageant I am sure that any such whimmery would have received short shrift  from the many ‘authorities’ who were omnipresent at the event.

On the afternoon of August 18th, 1922, during the Hammersmith Regatta, a certain Albert Haddock jumped off  Hammersmith Bridge.  It would seem ‘on a whim’ prompted by a bystander named Snooker.  Snooker had said: “Betcher a pound you won’t jump over, mate” and Haddock, who admitted to having had a beer or two, replied: “Bet you I will, then”. After handing his coat to Snooker, Haddock climbed on to the rail and jumped into the water below, which, as a Professor Rugg of the Royal Geographical Society confirmed, forms part of the River Thames.   Haddock being a strong swimmer then swam in a leisurely fashion towards the Middlesex bank. However, he was overtaken by a river police boat, the officers in which considered it their duty to rescue the swimmer. They therefore took him, unwilling, it appears, into their boat, and landed him. He was then arrested by an officer of the Metropolitan Police, taken to the police station and subsequently charged. A Magistrates’ Court found him guilty as charged and he was ordered to pay a fine of two pounds.

The only known photograph of Albert Haddock

Haddock appealed this magistrate’s conviction and fine, eventually attending The Court of Appeal of England and Wales. His appeal was heard by Lord Light, L.C.J. who dismissed his appeal and confirmed the conviction by the magistrates.  In his summation Lord Light, L.C.J.  said that  the charges were various, and it was difficult to say upon which of them the conviction was ultimately based – Haddock being accused of:

Nevertheless, Lord Light, L.C.J.  added the rejoinder that  it is a principle of English law that a person who appears in a police court has done something undesirable, and citizens who take it upon themselves to do unusual actions which attract the attention of the police should be careful to bring these actions into one of the recognized categories of crimes and offences, for it is intolerable that the police should be put to the pains of inventing reasons for finding them undesirable.

In dismissing Haddock’s appeal and confirming the conviction by the magistrates of South Hammersmith, the following is perhaps the most important part of the ruling by Lord Light, L.C.J. especially to those readers who continually confuse democracy with personal freedom.  In his ruling, Lord Light, L.C.J. said:

“The appellant made the general answer that this was a free country and a man can do what he likes if he does nobody any harm. And with that observation the appellant’s case takes on at once an entirely new aspect. If I may use an expression which I have used many times before in this Court, ‘it is like the thirteenth stroke of a crazy clock, which not only is itself discredited but casts a shade of doubt over all previous assertions’. For it would be idle to deny that a man capable of that remark would be capable of the grossest forms of licence and disorder. It cannot be too clearly understood that this is not a free country, and it will be an evil day for the legal profession when it is. The citizens of London must realize that there is almost nothing they are allowed to do. Prima facie all actions are illegal, if not by Act of Parliament, by Order in Council; and if not by Order in Council, by Departmental or Police Regulations, or By-laws. They may not eat where they like, drink where they like, walk where they like, drive where they like, sing where they like, or sleep where they like. And least of all may they do unusual actions ‘for fun’. People must not do things for fun. We are not here for fun. There is no reference to fun in any Act of Parliament. If anything is said in this Court to encourage a belief that Englishmen are entitled to jump off bridges for their own amusement the next thing to go will be the Constitution. For these reasons, therefore, I have come to the conclusion that this appeal must fail. It is not for me to say what offence the appellant has committed, but I am satisfied that he has committed some offence, for which he has been most properly punished”.

Those interested in a more complete transcript by the Court of Criminal Appeal of this case involving individual rights and liberties should read  Rex v. Haddock. Something Boris should have done before he wrote his article and something The Telegraph legal team should have advised him of.

One response to “Freedom is not a whimsicality!”